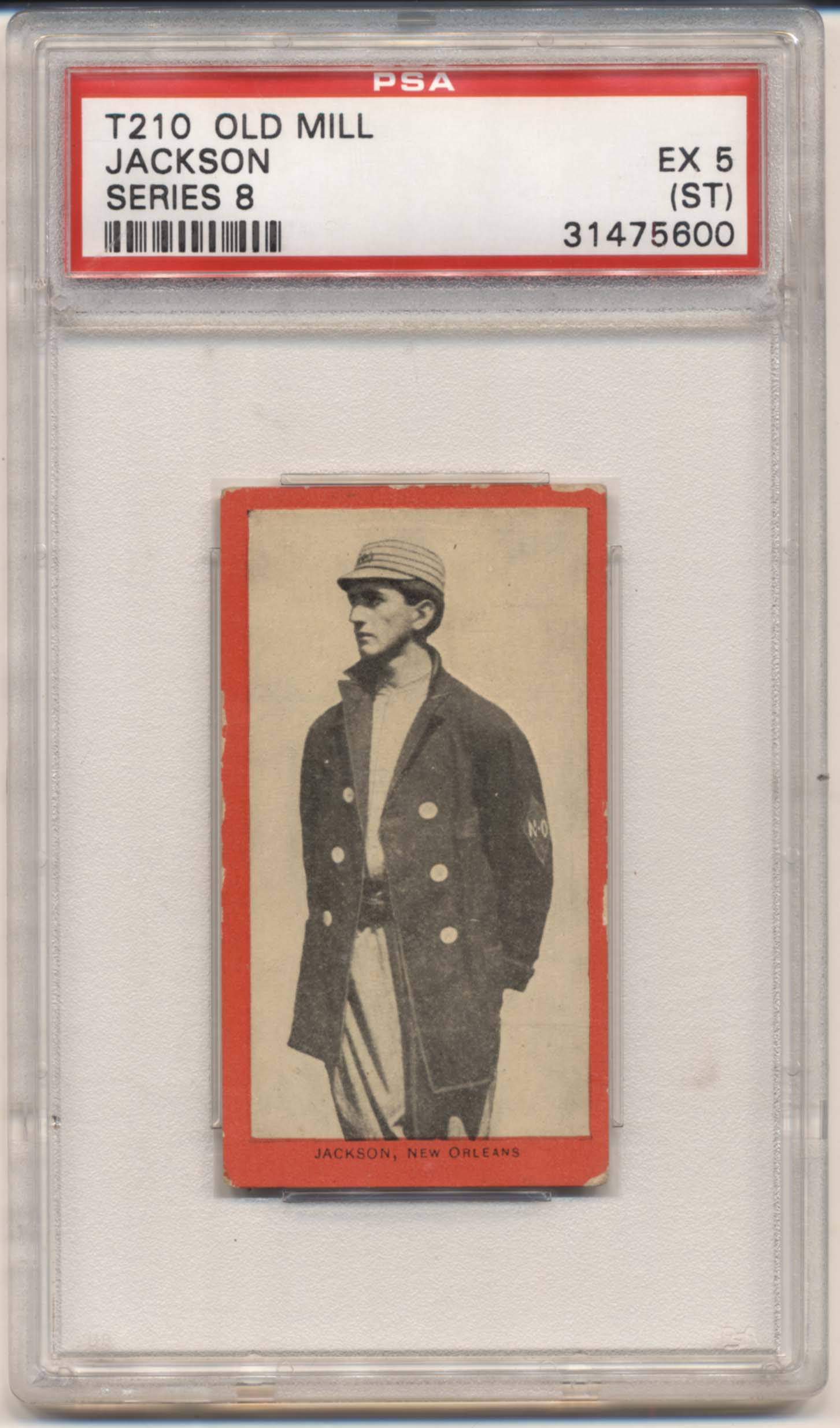 Among the handful of cards that can be reasonable argued to be the greatest of all baseball cards ever produced, this is an extremely rare card of none other than Shoeless Joe Jackson. A truly tragic figure, immortalized in film and in prose, Jackson remains among the most famous and adored baseball players to ever play the game. An almost mythic figure, he has very few cards and this is by far the king of his cards. Issued in 1910, Jackson got off to a very slow start (5 games in 1908, 5 games in 1909 and 20 games in 1910) in his otherwise amazing career (.356 career average among so much more), he played 136 games for the New Orleans Pelicans AAA team, batting .354. The offered card is fresh to market and does not even appear on the VCP web site. Issued as part of an enormous Minor League set with distinctive red or orange borders, this is a higher series card that is almost famously rare (the entire series is quite scarce as well).

This is the highest graded example on the PSA population report (six total have been graded).

As with all old cards, each of these has their good and bad aspects but the key point is that the offered card IS TWO GRADES above anything else that has traded and is almost certainly the nicest example in a graded holder. Very well centered, this has rich red borders, a perfectly clean and fine image and a clean surface. The corners show only mild and consistent wear, the red borders present very well; there is the faintest of paper wrinkles by the left border, not something you can really see except with magnification. The generic back HAS NO DAMAGE OR PAPER LOSS, there is a slight stamp and evidence of possible one-time scrapbook removal, it is again not bad at all.

The recent explosion in prices for trophy cards make this appear to be a truly historic bargain when compared to a PSA 5 1952 Topps Mantle trading for $125,000, PSA 7s for nearly $200,000 and PSA 8s for $500,000 plus and other recent prices for other trophy cards. The offered card, we would respectfully argue, is far rarer and better than those cards given the player and incredibly limited supply. This will of course not be an inexpensive purchase, but this auction offers the winning bidder a potential to add a fresh, top grade example of one of the cornerstone baseball cards to their collection.